The Alien Wiki has been a database for all things extraterrestrial since November 14th, 2012! 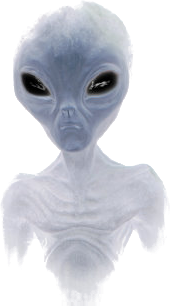 Welcome all new users! I hope you will find editing on the Alien Wiki to be both enjoyable and productive. There are many other wikis like this one out there, but this one is just for Aliens in general. Anything and everything Alien goes on this wiki.

In recent times as of 2013, the United States Federal Government and the Central Intelligence Agency (CIA) have officially acknowledged the existence of the controversial Area 51, a United States military aircraft base located in Nevada. The confession of Area 51's existence has left many extraterrestrial enthusiasts pondering why now to admit that it actually exists, both putting an end to many conspiracy theories while also building up the opportunity for more to come in the future. The CIA continues to deny that Area 51 contains the raw bodies or samples of extraterrestrial life and alien aircraft, although this does not eliminate the possibility for alien and UFO researchers.

More at the news archive >

A grey alien (also referred to as simply a grey and a Roswell Grey) is a commonly known alien that is most commonly known to have crashed in Roswell, New Mexico. The U.S government were seen to have retrieved the aircraft and the alien bodies. Now, there are accusations they are being held by the U.S. Government at the secret military aircraft testing ground known as Area 51.