Deacon, also known as the Proto-Xenomorph and the Ultra-Morph, is a Xenomorph-like creature born from an Engineer impregnated by the Trilobite. The Deacon made its debut in a pre-credits scene in the 2012 film Prometheus. Although it has yet to be confirmed if the Deacon is of any genetic relation to the Xenomorph, it can easily be assumed that the two species are related due to their similarity in appearance and their life cycles.

Deacon materialized after bursting out of the chest of an Engineer on one the USCSS Prometheus' escape pods on LV-223. Deacon is said to be born fully evolved as an adult. But since an adult version of Deacon has yet to be seen, it is unknown if that is true. Deacon was the result of the Trilobite impregnating an Engineer on board the escape pod. 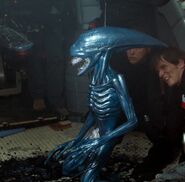 The actual prop of Deacon used in Prometheus.

Deacon in its package