Frank was voiced by Tim Blaney and was portrayed by a pug named Mushu in the first two films. Frank was absent from Men in Black 3 because Mushu had passed away by the time filming began.

At some point in time, Frank came to Earth and went under the physical disguise of a common pug. His motivation(s) for leaving his home planet are unknown.

After an unsuccessful attempt to stop Edgar the Bug from getting away, Agent K and Agent J go to Frank for information about "the Galaxy on Orion's Belt". When K confronts Frank, the pug is reluctant to speak. This is until K begins violently shaking Frank up and down in attempt to get information out of him. Frank reluctantly agrees and reveals that the Galaxy is on Earth, and is merely the size of a marble. Frank then leaves to be walked before his flight away from Earth, and begins barking at a cat. It is at this point that J realizes that "Orion's belt" is actually the collar of the cat who belonged to Rosenberg.

Since the events of the first film, Frank was hired to work in the mail room at Men in Black headquarters. After Agent J neuralyzed Agent T, Zed assigned Frank to be J's new partner. As their first mission together, Frank and J were assigned to investigate a murder at Ben's Pizzeria.

Frank then appeared in his own miniature Men in Black agent suit, much to J's annoyance and disliking. At J's request, Frank removed the suit before they went to investigate. While driving to the pizzeria, Frank began singing "I Will Survive", which annoyed J even further. J threatened to roll-up Frank's head in the car window should he continue singing, so Frank stopped. However, the relief was short-lived, as Frank began humming the song instead.

When Frank and J arrived at Ben's Pizzeria, Frank suggested that J interrogate the witness whilst he growled. Annoyed again, J demanded that Frank stay silent during the investigation. Although Frank promised to keep quiet, he immediately asked the other MIB agents "What've we got?" when he entered the restaurant. He also observed the dead body of Ben and humorously referred to the corpse as "zero percent body fat". When J went to interview Laura, he suggest that Frank stay outside as he feared that a talking dog would be too much for her after witnessing the murder of her employer. Confused, Frank asked what he was supposed to do in the meantime. J then suggested that Frank should "sniff around", which prompted the other MIB agents on the scene to laugh. An annoyed Frank then asked what the other agents found so amusing.

After J took Laura to a diner and finished the interview, he walked outside only to find Frank sitting in the passenger's seat of the car singing along to "Who Let the Dogs Out?" by Baha Men. J quickly turned off the radio and got in the car, where Frank began harassing J about his evident romantic feelings for Laura. J eventually mocked Frank for giving him romantic advice since the pug allegedly had a habit of chasing his own rear end. Offended, Frank declared that this was canine profiling. Frank and J then went to investigate Serleena's crashed ship, where Frank began gloating about being J's new partner. When another MIB agent on the scene laughed at the pug, Frank took this as offensive and violently tore the man's pants apart off-screen.

When Agent J learned that Serleena was in search of the Light of Zartha and that the now retired and neuralyzed Agent K was the only hope in saving Earth, Frank and J drove to the Massachusetts post office where the retired K now worked. Frank was very excited about going to get back K, which annoyed J. When J arrived at the post office, he asked Frank to stay in the car. Frank agreed, but he also reminded J that even though he looked like a dog, he only played one on Earth. J was eventually successful in convincing the neuralyzed K to come back to MIB headquarters with him, and Frank asked K "How's it hangin'?"

Frank accompanied J and K on the ride back to headquarters, but was bummed when Zed told him that he would need J and K together on the next mission. However, Zed did offer Frank another job as his new assistant, which would also provide the pug with better dental.

Although Frank is absent from the film as a character, a portrait of a pug face (more than likely Frank) can be seen in Agent J's apartment. When Agent J travels back in time to 1969 to stop Boris the Animal from killing Agent K, a billboard can be seen with an advertisement for "The Incredible Speaking Pug" when J is pulled over by two police officers. 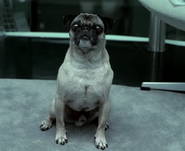 Section from The Weekly World News about aliens disguised as pugs.
Community content is available under CC-BY-SA unless otherwise noted.
Advertisement