The aliens from the film Independence Day are hostile beings that wish nothing more to destroy every source of life that they can find, as the president claimed when an alien transferred its thoughts into his mind.

This particular race of aliens comes from a society of many forms of aircraft and technology. Most of their technology is too advanced for an ordinary human to operate, including the way that the aliens even seat themselves in their ships known as Alien Attackers, of which one crashed in Roswell, New Mexico and the scientists who captured it installed human technology in order to use the craft. Other forms of the aliens' technology and vehicles are City Destroyers and the gigantic "Mothership".

These aliens have squid-like heads with silver bug eyes and no mouths. Their skin seems slimy and bony with skinny limbs and rather large fingers that resemble claws. Their feet are curved backwards making it appear as if they walk on their hands or an extra set of hands. Their skin color is blueish-silver although it appears dark brown under a certain type of light.

With their bio-mechanical suits on, their heads resemble a triangle-like shape and have smaller bug eyes and have no mouths. Their limbs are very skeleton-like and have black tips of the fingers and toes. Their primary skin color is a yellowish-sand-like color along with several stops of light aqua blue. They have eight tentacles with claws on their backs which gives them more forms of weaponry. 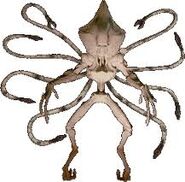 An alien with its bio suit on.

The aliens that crashed in Roswell, New Mexico.

Community content is available under CC-BY-SA unless otherwise noted.
Advertisement