The Alien, also known as "Big Chap", was a lone Xenomorph Lurker and the primary antagonist of the 1979 film Alien. The Alien was spawned from Kane, a USCSS Nostromo crew member, after he was attacked by a Facehugger while exploring a stranded Derelict-like ship on LV-426.

The Alien bursted from the Nostromo crews' member, Kane, as a Chestburster and escape. The Alien later molted its skin and killed one of the crew members that was searching for Ellen Ripley's runaway cat. One of the crew members later searched for The Alien and was supposedly killed by the creature by surprise. The Alien killed nearly all of the Nostromo crew until Ripley activated the ship's self destruct function and escaped in one of the ship's craft.

The Alien about to kill Lambert.

Closeup of the Alien.

NECA action figure of the Alien. 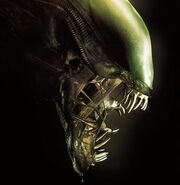 The Alien's head as seen on the cover of the Alien Anthology DVD box set.
Add a photo to this gallery
Retrieved from "https://extraterrestrials.fandom.com/wiki/The_Alien?oldid=14064"
Community content is available under CC-BY-SA unless otherwise noted.