The Fallen, formerly known as Megatronus Prime, was a Prime of his robotic species commonly, known as the Transformers. The Fallen was the true main antagonist in the Transformers film series hitherto the third installment.

In Generation 1 Dreamwave Productions comics, The Fallen was one of the original thirteen Primes created by Primus to defeat his evil brother Unicron, but The Fallen betrayed Primus and allied with Unicron.

The Fallen was one of the first Primes to arrive on the planet Earth with an Energon harvesting machine. The rest of his brothers vowed never to destroy a planet with life by using the machine to destroy suns to harvest Energon. However, The Fallen despised the human race and planned to destroy it by activating the machine. The only way that he could activate the machine was to use the legendary Matrix of Leadership. He and his brothers fought for the Matrix which resulted in the Primes entombing the Matrix in a crypt made from their own bodies Egypt and The Fallen retreating back to Cybertron to lay in rest trapped in cables for thousands of years. Hence, becoming leader of the Decepticons.

Transformers: Revenge of the Fallen

The Fallen made a short appearance in the beginning of the film when he and his brothers; the Primes, arrived on the planet Earth. The Fallen stomped on a group of prehistoric humans and even grabbed one with his hand. He then made a snarling sound before the film went into the present day.

After the Autobot leader, Optimus Prime was killed by Megatron, The Fallen freed himself from the cables and wires that trapped him and prepared to head for Earth. The Fallen later appeared on a sinking NEST ship claiming that revenge was his, as the film's title implies. He appeared shortly after on nearly all of the television screens of the world forcing the humans of Earth to turn over Sam Witwicky. 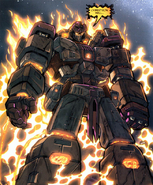 The Fallen's appearance in Generation 1 Dreamwave Productions comics.
Add a photo to this gallery
Retrieved from "https://extraterrestrials.fandom.com/wiki/The_Fallen?oldid=13398"
Community content is available under CC-BY-SA unless otherwise noted.