If I were to make my own film about Aliens... 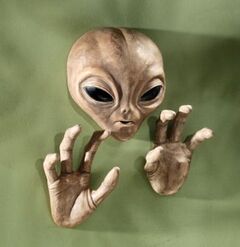 ...I would want it to be a successful, theatrical, non-low budget, scary, and interesting film, not one of the low budget television films which have boring plots and are all about the blood and gore.

A movie about Aliens that I thought about creating sometime in the future would be titled We Are Not Alone, a title which was used for a film, but not for a film based on Extraterrestrials. The movie that I would create about Aliens would be a little similar to the 2002 film Signs which featured a race of reptilian-like Aliens that created a crop circle on a farm. My movie would begin with a wave of sudden UFO sightings in New Hampshire and then become a wave of various crop circles on way-out-there farms. Then, people would report seeing strange figures in the local forests of small towns and finally, a few abductions here and there.

The Aliens in this film would be neither good, nor evil, simply a race of alleged grey-like Aliens which I would want to base on the Alien design for the "Roswell The Alien Plaque" made by Design Toscano. Which I think is one of the best designs of Aliens that I have ever seen. Another design for the Aliens that I thought of including was the design used for these 4 ft tall, latex, foam filled Alien props which resemble the one from the plaque.