The Zeta Reticulans are described as very similar to the average depiction of a grey alien. They are described as being slightly more human-like than an average Grey however. They have eyes described as all black with no pupils or iris. They have large heads with no hair at all and have small and hard to see ear-like bumps on the sides of their heads. They have, in addition to their more human-like appearance than typical Greys, small seemingly human noses, as well as human chin and facial expressions.

Zeta Reticulans are described as wearing silver jumpsuit-like clothing that covers their entire bodies including half of the neck, upper torso, and legs while the uniform does not cover the head or the hands. In a book titled Alien Abduction?, however, images of several Zeta Reticulans wearing light blue clothing with silver trimming were depicted.

There is not much known of these particular aliens. The only evidence of the Zeta Reticulans coming from the star system Zeta Reticuli is Betty Hill who claims that while she was being examined by one of the aliens during her abduction, she asked the alien what planet it and the others that were on board the UFO were from. Betty claims that the alien showed her a star map of the Zeta Reticuli star system which was not discovered until after the Hills' alleged abduction. Betty revealed this information of her and her now deceased husband's abduction while under hypnoses and drew a picture of the star map of Zeta Reticuli.[2] 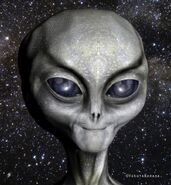 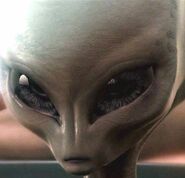 Zeta greys from the taken miniseries

Travis Walton was abducted by Zeta Reticulans too
Add a photo to this gallery
Retrieved from "https://extraterrestrials.fandom.com/wiki/Zeta_Reticulan?oldid=8944"
Community content is available under CC-BY-SA unless otherwise noted.